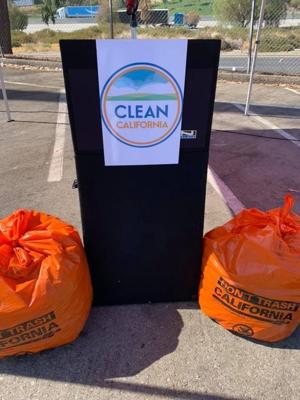 Clean California is more than just a slogan – it’s a call to action, officials said.

Caltrans and its local partners are picking up litter on highways statewide and encouraging members of the public to do their part to keep their local communities clean and beautiful.

As part of a statewide day of action to highlight the new program, Caltrans District 8 Director Michael Beauchamp, District 8 maintenance workers, the California Highway Patrol, and local agencies kicked off the Clean CA initiative on July 7 at the Caltrans Park and Ride lot in Jurupa Valley at Country Village Road, which is located in Riverside County, just south of Fontana.

“The Clean California initiative confronts one of the most persistent challenges in the state — litter on our state highways and local roads,” said Caltrans Director Toks Omishakin. “The $1 billion, multi-year cleanup effort will remove roadway trash, create thousands of jobs and engage communities in beautification efforts to transform our roadsides into places of pride.”

“Our goal is to expand litter abatement and significantly reduce trash along state and local highways, rest areas, park and ride lots, tribal lands, pathways, transit centers, and all public places. Caltrans will be partnering with local agencies, tribes, and underserved communities to expand litter abatement and garner art and beautification projects to beautify communities in Riverside and San Bernardino counties,” said Beauchamp.

Clean California will be generating an estimated 10,000 to 11,000 jobs over three years, including opportunities for people experiencing homelessness, at-risk youth, and people re-entering society following incarceration.

The initiative represents a significant investment in litter collection and community engagement to transform unsightly roadsides into spaces of pride for all Californians, officials said.

This statewide effort includes potential projects in all 58 California counties, with nearly a third of the funds being directly invested into cities, counties, tribes, and transit agencies to clean local streets and public spaces. Through litter removal, this initiative will protect waterways, natural resources, public safety and health, officials said.

Caltrans collected 270,000 cubic yards of trash in 2020 — enough to load 18,000 garbage trucks. Clean California will remove an additional 1.2 million cubic yards, or 21,000 tons, of trash from state highways each year, the equivalent of filling the Rose Bowl three times or enough garbage bags to stretch from Los Angeles to New York City.

APD in search of missing man