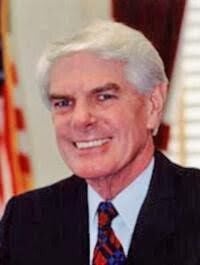 “Congressman Jerry Lewis is one of the most influential Californians to ever serve in the U.S. House of Representatives,” said Calvert, who was elected to the House in 1993. “Jerry made an enormous impact on his district, the state of California and our nation throughout a life dedicated to public service.”

Born on Oct. 21, 1934, in Seattle, Lewis graduated from San Bernardino High School in 1952, where he captained the swim team.  In 1956 he earned a bachelor’s degree from UCLA. Lewis served as a Coro Foundation fellow in San Francisco. After college, Lewis was in the insurance business.

Lewis served in the California Assembly from 1969 to 1978, where he led the effort that established the South Coast Air Quality Management District in 1976. He ran for the state Senate in a special election in January 1974, losing to Democrat Ruben Ayala.

He was elected to the House of Representatives in 1978, winning with 61 percent of the vote. He was reelected 16 times, never by less than 61 percent. He was chairman of the House Appropriations Committee , serving in that role during the 109th Congress from 2005 to 2007.

Lewis secured millions of dollar for projects in San Bernardino County, including $167.2 million for Loma Linda University. In 1998, he secured start-up funding in 1998 for Loma Linda University’s Proton Beam treatment center.  He was instrumental in securing $450 million for construction of the Seven Oaks Dam, which was built east of Highland between 1993 to 2000 to prevent flooding of the Santa Ana River in Orange County.

He was skilled at getting approval for earmarks, discretionary spending in bills not necessarily related to their missions.

In 2008, the Citizens for Responsibility and Ethics in Government accused Lewis of the misuse of his position as chairman of the House Appropriations Committee to steer hundreds of millions of dollars in earmarks to family and friends in direct exchange for contributions to his campaign committee and political action committee. He was also cited in the group’s reports in 2006, 2007 and 2008.

However, in 2010, the U.S. Department of Justice closed the case without filing charges.

U.S. Rep. Jay Obernolte, a Republican from Big Bear Lake, issued this statement: “Heather and I were profoundly saddened by the loss of Jerry Lewis. Jerry selflessly represented San Bernardino County in a number of capacities, including in Congress. His legacy of public service and his accomplishments for the people he served will live on for generations to come.”

Calvert concluded: “Jerry was my colleague, my mentor and my friend. I’ll deeply miss his friendship, his counsel and his ever-present smile that provided a window into his eternally optimistic soul. My heartfelt condolences and prayers go out to Jerry’s beloved wife, Arlene, as well as his family, former staff members, and all who were fortunate enough to know him.”

WV Sets Back To School Sales Tax Holiday For This Weekend

Judge rejects $ 100,000 bail for alleged kidnapper, holds him in custody, without bail

Home runs condemn the Athletics against the Padres, who face Oakland for the fourth consecutive loss