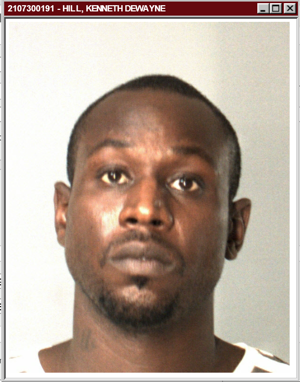 A man was arrested for allegedly being involved in the human trafficking of a 17-year-old girl who had been rescued at a hotel in Fontana earlier this year, according to the San Bernardino County Sheriff’s Department.

Members of the county’s Human Trafficking Task Force identified Kenneth Hill as the suspected trafficker and obtained an arrest warrant for him in the amount of $750,000. On July 6, Hill was located in Moreno Valley and taken into custody without incident.

The case came to the attention of investigators back on May 9, when a report on the National Human Trafficking Hotline indicated that the juvenile victim was asking for help to escape her traffickers.

The victim had contacted employees at the front lobby of a hotel in the 17000 block of Valley Boulevard, telling them she was being held and forced to prostitute herself at the direction of an unidentified adult male and female suspects. She was in fear for her safety and was aware the two suspects were there looking for her to make her leave with them.

Deputies from the Fontana Sheriff’s Station, along with Fontana Police Department officers, immediately responded to the location to contact and secure the victim’s safety. Upon their arrival, officers located the victim but were unable to find the suspects, who had left prior to their arrival.

During their contact with the victim, investigators confirmed she has been a missing juvenile from Florida since January. Investigators were also able to determine the victim had been brought to California by the suspects with the intention of exploiting her in the commercialized sex industry. The victim indicated she had been both physically and emotionally abused by the suspects while being forced to perform acts of prostitution on their behalf.

“Fortunately, the victim took the first opportunity to escape the suspects and contact hotel employees for help,” the Sheriff’s Department said in a news release.

Investigators provided the victim with access to medical care, resources and assistance in getting her safely returned to her family in Florida.

This investigation is ongoing, and investigators believe there are other unidentified victims related to this case. They are asking that anyone with information contact the Human Trafficking Task Force at (909) 387-8400. Anyone wishing to remain anonymous may contact We-Tip at 1-888-78-CRIME or leave information on the We-Tip Hotline at www.wetip.com.