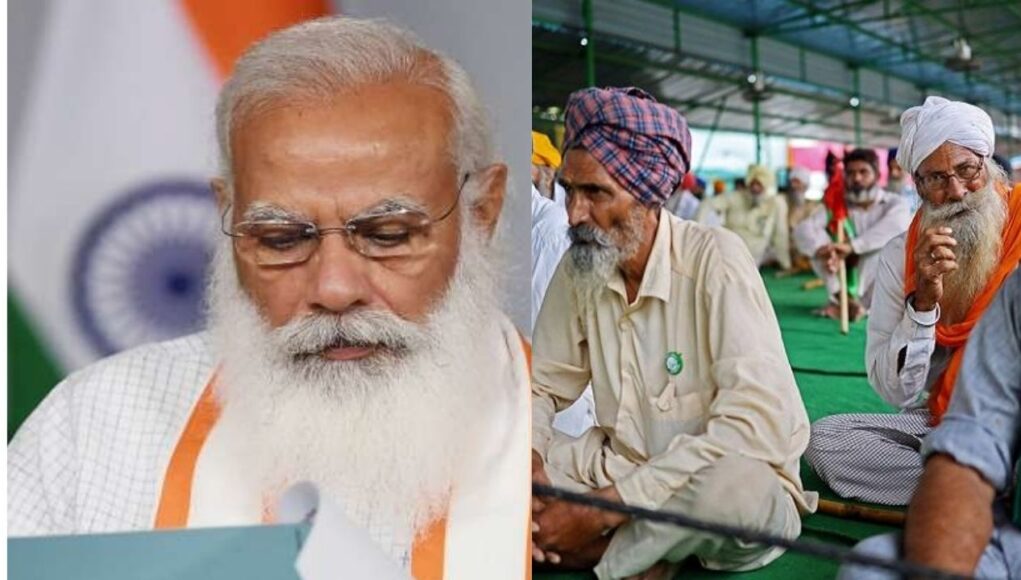 Prime Minister Narendra Modi announced today that three unpopular agriculture rules that have sparked enormous farmer demonstrations across the country for over a year will be repealed, only months before elections in places like Uttar Pradesh and Punjab.
The declaration was made during the Guru Purab festival, when the birthday of Sikhism’s founder, Guru Nanak, is commemorated across India, mostly in Punjab, where elections are set to take place in three months.

“Perhaps something was missing in our tapasya (efforts), which is why we were unable to persuade certain farmers to comply with the legislation. But today is Prakash Parv, and it’s not the time to point fingers. I’d like to inform the country today that we’ve decided to repeal the three agriculture laws “In a speech to the nation, Prime Minister Modi remarked.

“We will complete the process of abolishing the three laws in the Parliament session beginning at the end of this month,” he stated.

The Prime Minister began by defending the regulations, claiming that they were intended as improvements, primarily for the country’s small and marginal farmers. However, he conceded that although some farmers were convinced, others were not.

“Everything I did was for the benefit of farmers. What I’m doing is for the good of the country.”

Since November 2020, tens of thousands of farmers from Punjab, Haryana, Uttar Pradesh, and Rajasthan have been camped outside Delhi, asking that the “black laws” be repealed. The BJP has encountered widespread opposition in northern states, which it cannot afford as it prepares for upcoming elections, including the national elections in 2024.

The protests, according to Rakesh Tikait, a leading farmer leader, would not cease until the laws are repealed in the session that begins on November 29.

Throughout multiple rounds of talks between the administration and farmers, as well as interruptions in parliament and Supreme Court sessions, the farmer protests were unyielding.

“We haven’t been able to persuade farmers to change their minds. Only a small percentage of them were opposed to the laws, but we continued to strive to educate and inform them “Prime Minister Modi stated.

The opposition and farmers have accused the government of rushing the three bills through parliament without much debate. The rules, according to the government, will eliminate intermediaries and increase farmers’ revenues by allowing them to sell anywhere in the country. Farmer unions said that the laws would expose them to unfair competition, put them at the whim of corporations, and rob them of a guaranteed price for their produce.

The stunning reversal is politically advantageous for the BJP as it seeks re-election in Uttar Pradesh, a crucial state in the run-up to 2024.

The BJP’s re-election campaign would have been harmed by farmer demonstrations in western Uttar Pradesh, according to party leaders.

The Prime Minister’s and other major leaders’ frequent visits to Uttar Pradesh, such as Amit Shah, demonstrate the party’s commitment to retaining the state’s political importance.

PM Modi was scheduled to return to Uttar Pradesh shortly after his speech to announce a slew of new initiatives.

Many see this as a masterstroke in Punjab, where the BJP has been relegated to a small factor following the breakup of ties with long-time ally Akali Dal over farm rules.

Time Magazine’s 2021 “Person of the Year” is Elon Musk