Home Entertainment New Disney Plus Movies to Watch in June 2022 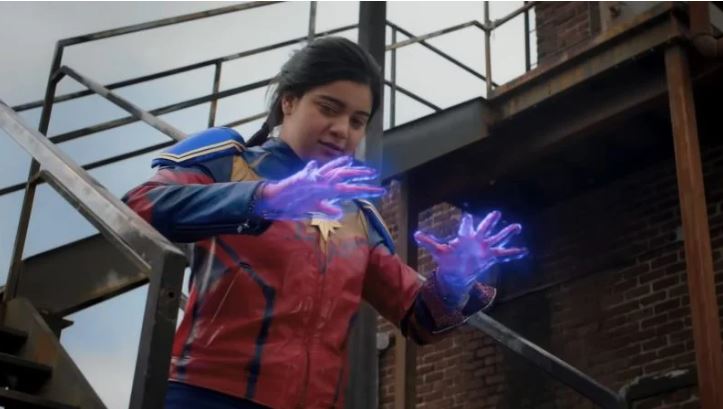 You are looking the New Disney Plus Movies to Watch in June 2022 and we are sure that you will get the full list here. The list of premieres on Disney + for June 2022 is here and there are some things that you will definitely want to mark on your calendar.

This month’s big premiere is, for obvious reasons, Ms. Marvel, a new Marvel series that introduces us to a Muslim teenager named Kamala Khan, who decides to use her new superpowers to become a hero and protect the inhabitants of her city, proving that you don’t have to be an adult or look a certain way to do good and become an icon.

In addition, there is a documentary about the movie Lightyear, the spin off of Toy Story that shows us the story of the astronaut who was the inspiration for the toy that became one of Andy’s favorites.

That’s not all, there are new movies, documentaries and more chapters of the Obi-Wan Kenobi series, which already surprised with two first chapters in which little princess Leia stole the show.

All the premieres and new Disney plus movies in June 2022 are here in our list:

Ms. Marvel is a new and original series featuring Kamala Khan, a Muslim American teenager growing up in Jersey City. An avid gamer and voracious fan-fiction writer, Kamala is a fan of Super Heroes and has an enormous imagination with them, especially when it comes to Captain Marvel. However, her Kamala feels invisible both at home and at school, until she gains superpowers like the heroes she has always looked up to. Life gets better with superpowers, right? That’s why, Ms. Marvel is one of the new Disney Plus movies to watch in June 2022.

A Fan’s Guide to Ms. Marvel is a short documentary film that gives audiences an exclusive behind-the-scenes look at the groundbreaking original series Ms. Marvel, from its origins as a comic book to its development and production as the next Marvel Studios series on Disney+. Includes interviews with its award-winning filmmaking team and the series’ captivating star, Iman Vellani.

Disney’s STARGIRL IN HOLLYWOOD is the follow-up to the 2020 Disney+ film about Stargirl Caraway ( Grace VanderWaal ), a free-spirited, beautifully voiced teen whose simple acts of kindness work magic in the lives of others. The film accompanies her on her journey from Mica, Arizona to a larger world of music, dreams and possibilities. When her mother, Ana (Judy Greer), is hired as a movie costume designer, they move to Los Angeles, where Stargirl is soon associated with an eclectic assortment of characters. Among them are two brothers who aspire to be filmmakers, Evan (Elijah Richardson) and Terrell (Tyrel Jackson Williams); Mr. Mitchell (Judd Hirsch), one of his neighbors; and Roxanne Martel (Uma Thurman), a musician that Stargirl admires and encounters on her journey. You should watch this movie as Hollywood Stargirl is one of the new Disney Plus movies to watch in June 2022.

Beyond Infinity: Buzz and the Journey to Lightyear – June 10

Beyond Infinity: Buzz and the Journey to Lightyear from Pixar Animation Studios explores the evolution of an icon, following Buzz Lightyear’s journey from toy to Space Ranger that inspired that toy’s creation. Featuring filmmakers, storytellers, artists and members of the LIGHTYEAR voice cast, the documentary details how Buzz’s action figure’s original design came to be and how that look translated years later into the actual hero that LIGHTYEAR stars in., the Disney and Pixar film that will hit theaters on June 16. Delving into the cultural impact of the most famous flying toy in the galaxy and its importance to Pixar filmmakers, this documentary tries to really show what lies to infinity and beyond. Beyond Infinity: Buzz and the Journey to Lightyear is directed by Tony Kaplan and produced by Sureena Mann.

Produced entirely in Latin America, Siempre fue yo follows the adventures of Lupe ( Karol Sevilla ), a Mexican girl whose life takes an unexpected turn when she finds out about the death of her father, El Faraón ( Christian Tappan ) –the greatest musical star of Colombia– and decides to leave his native Mexico behind to travel to Cartagena and attend the funeral. She quickly realizes that nothing is what it seems and she decides to enroll in a musical contest to be close to her father’s environment and investigate her suspicious death. Along with Noah ( Pipe Bueno ), a young former assistant to her father, Lupe embarks on a mission full of danger, romance and lots of music to solve this mystery in the heart of the Colombian Caribbean. We know that fans of “It Was Always ME” are waiting to watch the movie, and that’s why we bring the list here for you since  the movie is one of the new Disney Plus movies to watch in June 2022.

After emigrating from Nigeria to Greece, Charles and Vera Antetokounmpo ( Dayo Okeniyi and Yetide Badaki, respectively) struggled to survive and provide for their five children, living under the daily threat of deportation. With their eldest son still living in Nigeria with relatives, the couple were desperate to gain Greek citizenship, but were undermined by a system that hurled obstacles at every turn. When they weren’t selling goods to tourists on the streets of Athens with the rest of the family, brothers Giannis ( Uche Agada ) and Thanasis ( Ral Agada)) played basketball with a local youth team. Newcomers to the sport, they discovered their great abilities on the basketball court and worked hard to become world-class athletes, along with their brother, Kostas ( Jaden Osimuwa ). With the help of a manager, Giannis entered the 2013 NBA Draft with a remote prospect that would change not only his life but that of his entire family. Giannis and Thanasis helped the Milwaukee Bucks earn their first championship ring in 50 years, while Kostas played for the Los Angeles Lakers.

TREVOR: THE MUSICAL, produced by RadicalMedia, revolves around a charming 13-year-old and his turbulent journey of self-discovery. After an embarrassing incident at school, Trevor must muster the courage to forge his own path. The musical is based on the 1995 Oscar®-winning short film Trevor, which inspired the creation of the nonprofit organization The Trevor Project, the world’s largest mental health and suicide prevention agency for LGBTQ+ youth ( Lesbians, Gays, Bisexuals, Transgender, Queer and the rest of identities and orientations included in the group).

“Baymax!”, from Walt Disney Animation Studios, returns to the fantastical city of San Fransokyo, where the affable, bouncy and inimitable personal care robot Baymax (voice of Scott Adsit) is thrown into doing what he does best, helping others. This six-episode series of adventures introduces extraordinary characters who need Baymax’s unique approach to heal in more ways than they realize.

Matt Murdock isn’t just any lawyer from Hell’s Kitchen. His senses were heightened after he was blinded in an accident as a child. Under the cover of night, he fights crime and attracts powerful enemies, such as Wilson Fisk (aka Kingpin). But his dilemma grows day by day: Beneath the mask, he wants to believe in the law; Daredevil, he takes justice into his own hands. We have already known that you fans are looking for the premiere and Daredevil movie which is among the new Disney Plus movies to watch in June 2022. Read More: FFMovies: Top 50 Alternatives to Watch Your Desired Movies in 2022

A tragedy cut her career as a superhero short. Now, Jessica lives in New York and opens her own detective agency with the idea of ​​leading a quieter life, but neither the past nor the paranormal cases abandon her, and her traumas coexist with her. Save the world? Not so much anymore… she just wants to make ends meet.

After a sabotaged experiment leaves him with super strength and unbreakable skin, Luke Cage becomes a fugitive trying to rebuild his life in modern-day Harlem, New York City. But he is soon drawn from the shadows and must wage a battle for the heart of his city, forcing him to confront a past he had tried to bury. Fans always are looking for the premiere and Luke Cage, which is among the new Disney Plus movies to watch in June 2022.

Fifteen years ago, the private jet carrying the billionaire Rand family mysteriously crashed in the Himalayas. Nearly twenty years later, Danny Rand, the sole survivor of the crash, returns to New York City as the immortal Iron Fist. Danny quickly discovers that life in New York City can be just as contentious as the monastery where he spent the last 20 years. Marvel’s Iron Fist follows Danny Rand’s journey as Iron Fist in New York City.

Marvel’s The Defenders follows Daredevil aka Matt Murdock, Jessica Jones, Luke Cage and Iron Fist aka Danny Rand, a quartet of unlikely heroes with a common goal: save New York City. This is the story of four lonely figures, burdened by their own personal challenges, who reluctantly realize that they can be stronger when they come together.

Frank Castle, also known as the Punisher , believes he has gotten revenge on the criminals responsible for the tragic murder of his family. However, he soon discovers a larger and deeper conspiracy behind the events that transpired, involving his time serving in the Marine Corps. Alongside run-ins with law enforcement, his former best friend Billy Russo, and former NSA analyst Micro, Frank seeks to uncover the truth once and for all.

You the fans have already known about all the premieres and New Disney Plus Movies to Watch in June 2022. So, don’t be late, hurry up.

Editor99 Desk - September 29, 2021 0
Chrissy Teigen Pays Tribute To The Son She ‘Almost Had’ Chrissy Teigen and John Legend announced last year that they were expecting their third child....