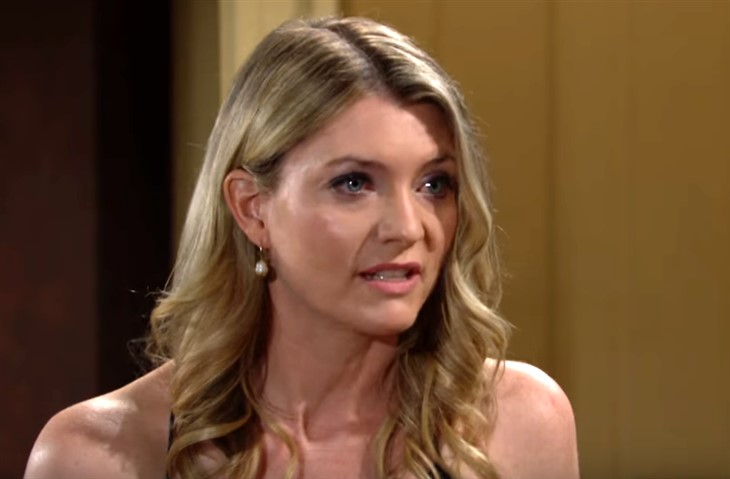 The Young and the Restless (Y&R) spoilers reveal that blond she-devil Tara Locke (Elizabeth Leiner) is playing with fire by sticking too many irons in the fire. The character seems doomed for disaster but is that what will happen, an exit from Genoa City, Wisconsin?

There is speculation that the character could be about to exit stage left and we’re here to unpack what we know about this The Young and the Restless rumor—or is a real possibility?

The Young And The Restless Spoilers – Will Tara Leave The CBS Sudser?

Adding fuel to the fire is that Tara’s baby daddy Kyle Abbott will soon depart since the actor who plays him, Michael Mealor, has said as much. Kyle was Tara’s reason for coming to town in the first place, to introduce him to their secret love child. Does Tara have any real story if Kyle leaves?

Mealor is already done with filming so Kyle’s departure is imminent. Is it possible that he could take his love child with him? Right now fans think that it will be revealed that little Harrison Locke (Kellen Enriquez) is not really Kyle’s son which would facilitate his leave from town.

The truth is that Elizabeth Leiner is on contract as Tara Locke. That means she was meant to be a part of The Young and the Restless going forward. But the show is in charge here, and if they want to cancel her contract at any time they can. This gives credence to the rumors that Tara is on the chopping block, but not so fast fans!

Tara is living in the Abbott mansion at the moment and getting close to Jack Abbott (Peter Bergman). At the very least they are getting familiar with one another. Is it possible she could hook up with the eligible bachelor?

The Young And The Restless Spoilers Thursday, July 22: Stitch Coos At Abby, Teen Scene Heats Up, Amanda Out For Blood #yr #youngandrestlesshttps://t.co/GHmmm0XZPJ

If so she would be trading up in our opinion, from Ashland Locke (Richard Burgi) to Smiling Jack. There is a big problem however, but not one that is impossible to overcome. Jack would be horrified to learn he is not the tyke’s grandfather after all.

But Jack is also a white knight and if Tara spun her tale right, he might try and rescue her. Tara has moved to file for sole custody of her son, and she might need an ally to help in this fight. Will Tara stick around and fight for Jack?

Be sure to catch up on everything happening with Y&R right now. Come back here often for The Young and the Restless spoilers, news, and updates.

The science of soap operas: when Y&R went too far

These days, everyone talks about listening to science, whether that means following the mandates of the Center for Disease Control, reading Ivy...

TV host Ant McPartlin is preparing to marry his other half after getting engaged on Christmas Eve last year. Inside Ant McPartlin’s wedding...

Who is Laurel Hubbard? Weightlifter and first transgender athlete to compete in the Olympics

Tony La Russa plans to give pitchers plenty of rest in the second half of the season.